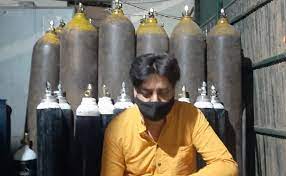 The Sagarpur police station raided a house and arrested a businessman who sold oxygen in black. He had no license to sell cylinders. Police seized 32 large cylinders and 16 small cylinders from his possession. The police is questioning the businessman. Investigation revealed that the house belongs to Anil Kumar, who has a business of supplying industrial gas. After pouring the gas from the big cylinders to the small cylinders, he used to sell it to the needy for 12 and a half thousand.

The crime branch of the Delhi Police has arrested four different gangs by exposing two different gangs for issuing Remedesivir injection. Some of the accomplices of the accused are identified and they are being punished at many places in the NCR including Punjab, Mewat. Police has detained some people. A total of 81 remadecivir injections are recovering from the accused. The accused used to sell an injection bottle for 25 to 40. He has admitted in interrogation that he was selling the injections in black. Talwinder is associated with the pharmaceutical sector. He knew where to get injections easily. He used to get injections from the courier company from the pharmaceutical company and sold it at expensive prices. Zaire of this courier company sold in black all over the country. The boy from the courier company knew that Talwinder sells in injections in black.

With the increase of corona infection, the demand for remadecivir injections has increased significantly. Due to this, injections are not easily available in the market. These people were black marketing the injections at high prices. The Delhi Police Crime Branch arrested two more accused i.e. Basant Goyal the owner of Goyal Medical Store. Also one of his employee Ramo-Abtar while carrying out life-saving injections. They were selling the injections at an expensive price in black. Of course, they had established their own network, which used to deliver the injections from one place to another according to the demand.