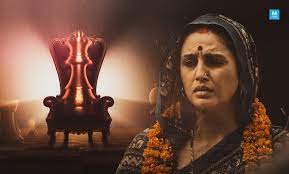 The Angle
Maharashtra
OTT platforms are proving to be very effective for entertainment. There you will find suspense, comedy, thrill, drama all. Every week OTT platforms come up with something new and the audience entertained sitting at home. The month of May brought many films and series for the audience. Salman Khan’s starrer film ‘Radhe’ released on Zee5 in early May. The film got 4.2 million views on the very first day. Apart from this, A good audience receiving the film ‘Sardar Ka Grandson’ released on Netflix. Now, this week also many OTT platforms like Netflix, Amazon Prime, Zee5, and Sony Liv are bringing great movies, shows, and series to their viewers. Huma Qureshi starring ‘Maharani’ a Bihar politics-based series is released.

The plot of the show revolves around Rani Bharti, a homemaker, and wife of Bihar’s Chief Minister whose life takes an interesting turn when her husband, Bhim Singh Bharati, announces her to be the next Chief Minister of Bihar. While all the party members look pretty excited to know the name of the successor, this decision by Bihar’s CM shocks everyone. The Web series- Maharani features Huma Qureshi in the lead role. Besides Huma, the show stars an ensemble cast that includes actors like Sohum Shah, Pramod Pathak, and Amit Sial, among others.

Broken But Beautiful Season 3 – May 29th

The third season of the web series ‘Broken But Beautiful’ is released on Alt Balaji and Zee5 on May 29. Siddharth Shukla and Sonia Rathi are in lead roles in this series. Santosh Singh is the director of this series. The story shows the chemistry of Agastya and Rumi. The previous season showed the love chemistry of Veer and Sameera and

How Neha Kakkar became such a ‘Hit Singer’ from an ordinary girl?