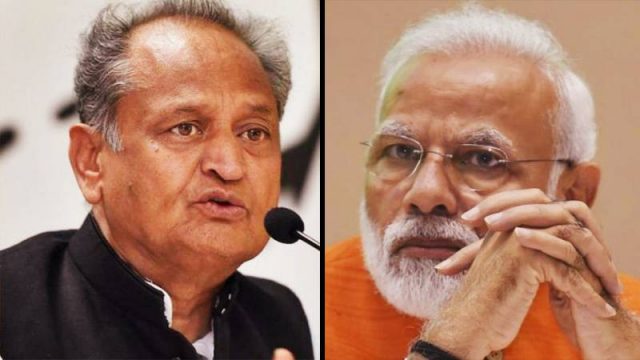 At a time when Modi government is increasing the dose of its media publicity like the PM Modi bowing down in front of the people in Abu Road Rajasthan in an attempt to appear humble, for Congress Ashok Gehlot is the best bet.No one can doubt that Modi has a towering image and has a large support base pan India but equally true is that, that large sections of poor people are reeling under a state of privation lacking food and are burdened with heavy unemployment.  In such a scenario, Gehlot with his pro poor image and as a curator of several social security schemes is the best weapon congress party has to combat BJP in the election’s which are just a year away.  Gehlot has provided succor to crores of people by paying pension, giving them freedom from costly medical treatment in the days when price rise has been like a whip on their backs. In Rajasthan Gehlot is a brahmastra if the congress wants to defeat the BJP. In the last 4 years he has already made them politically irrelevant. Though BJP tried to raise the issue of sentimental issues which is its favourite political tool, with his good governance style, Gehlot has hit their wickets by making them out on a duck on these issues also.  Now with Owaisi also making an entry in Rajasthan and political observers claiming that politics of polarization will now be in full swing in the state ahead of elections, Harbinger of social security schemes in the state, Ashok Gehlot is Brahmastra the congress has to decimate the BJP.