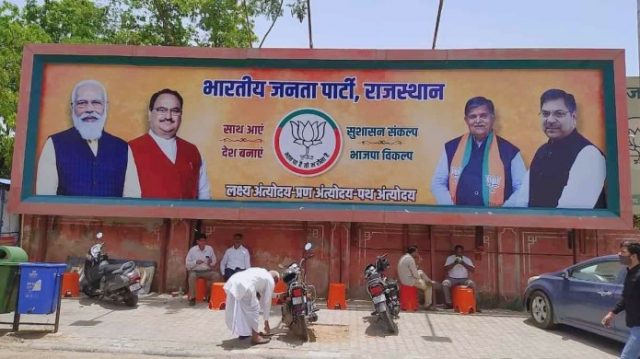 BJP leaders in the state are caught in the game of tug of war. The factional wars have become so intense that it is no longer a secret that former CM Vasundhara Raje and other leaders are fighting a battle. Sidelined by the state leadership Raje has become active on social media and Vasundhara Rasoi started by her supporters without any involvement of the BJP organisation is seen as another indication of her attempts to regain supremacy.

The internal rivalry talks spread like wildfire after the controversy of her pictures not being there on the hoardings of the party at the office in Jaipur. It was said that attempts were being made to sideline her and after that many of her supporters on social media came out in her support.

It is worth remembering that during the by elections too in the state, the social media handles of the party had chosen not to put her photographs in the campaign material.

Meanwhile on Thursday , media reported that posters of her being “missing” along with her son Dushyant Singh MP of Jhalawar-Baran were pasted on the walls. So again there is a controversy.

As if this was not enough, the suspension of BJP’s Mayor Jaipur greater Saumya Gurjar gave one more opportunity for different factions to expose chinks in the armour. The BJP MLAs of Jaipur reportedly are said to be miffed over the working of suspended Mayor Gurjar. The new Mayor Sheel Dhabai wasted no time in taking the charge after being appointed at the same time when her party colleagues were staging dharna over suspension of Gurjar.