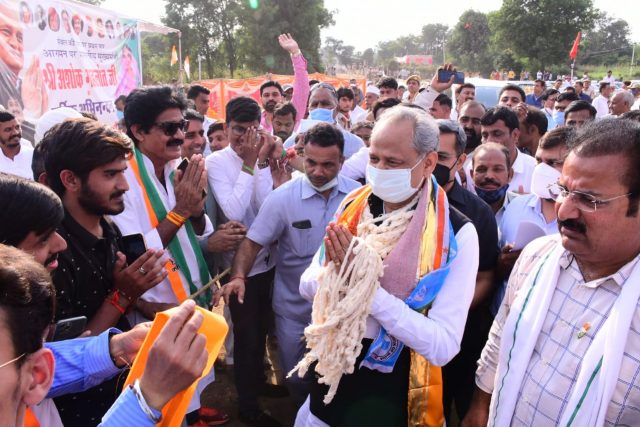 Rajasthan’s Vallabh Nagar and Dhariywad have chosen development over propaganda.

In a clear message to the country and the BJP, Voters rejected BJP in both these seats and gave its stamp of approval to CM Ashok Gehlot by making the Congress candidates win on Dhariywad and Vallabhnagar.

Congress while retained Vallabh Nagar, It snatched Dhariywad from the BJP which had to swallow bitter pill of defeat.

The credit for these win goes to Gehlot as he pursued his agenda of good governance despite all the challenges and propaganda spread by the BJP about women security issues, farmer loans, jobs etc.

Infact people’s mandate shows that the recruitment process on various fronts started by Gehlot has got him support from youth.  The policy of compulsory filing of FIR, immediate police action and rapid judgement in women related crimes has also gone down well with the people who know that the crimes happen in every state irrespective of the rule of congress of BJP or any other party.

CM Himself led the party and informed the people about the various welfare works. More than the CM telling people, the ground reality of the schemes showed that people have got benefit and this has translated into votes not only in these two assembly by elections but in various local body, panchayati raj elections also.

BJP looked confused while facing Gehlot and had no reply to the point of good governance of Gehlot. Its religious sentiments agenda has fallen flat . Have repeatedly pointed out that BJP has lost the nerve of the people.

Youth wants jobs, state wants peace and prosperity  which Gehlot is giving but BJP is not realizing this fact and wants to continue on the path of religious issues which are becoming stale for the new generation.