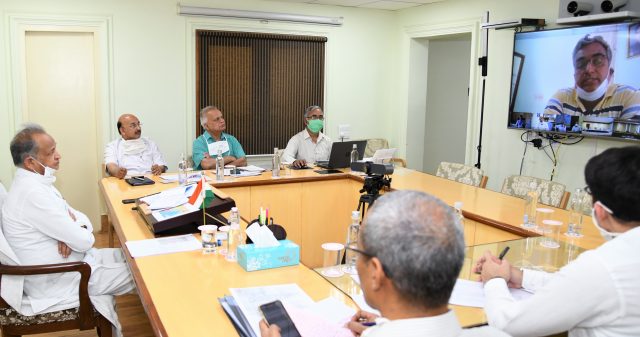 Chief Minister Ashok Gehlot has called for the need of strengthening Locust Warning Organisation because of the regular attack of locusts in the state after 3 decades. He said that last year too, there was heavy loss to the farmers due to locust menace.  This year, it is being feared that it will further intensify. Therefore we will have to face this challenge with activeness.

Gehlot was discussing the locust control with the collectors of the border districts, officials of locust warning organization and agriculture officials through video conferencing.

He said that attention of Prime Minister Narendra Modi was also drawn in recent days during the video conference. Since the locust warning organization workers under centre, therefore the central government should further strengthen it and should make available essential resources.

The Chief Minister also said that this time  locust attack has been in a different form.  Some locust swarms have reached Ajmer, Jaipur, Karauli, Tonk, Dausa, Sawai madhopur and other districts from border districts. New measures need to be adopted to control them.  He further added that last year, locust warning organization along with agriculture department and farmers did a good job and this time attempts will have to be made with complete awareness.

During the video conference, agriculture minister Lalchand Kataria said that after entering the state from Pakistan border on April 11, small swarms of locusts have reached other districts. They have affected about 50 thousand hectare area. Though the farmers in districts of western Rajasthan have not suffered much loss as this is not the time of crops. He said that the agriculture department has pesticides available in sufficient numbers.

Revenue minister Harish Choudhary said that excessive breeding of locusts is taking place in  African countries and it is feared that swarms will reach state in large number. He said that along with the efforts of government, public participation was also necessary for locust control.

Minister of state for agriculture, Bhajanlal Jatav said that for the first time locusts have entered many districts of eastern Rajasthan and due to irrigated area , crops of Zayad season are present. Therefore there is fear of loss of these crops.

The officials of agriculture department, disaster relief and other officials informed about their preparedness level.