Chief Minister Ashok Gehlot is known to be leader who is always  with the people whenever needed. This was once again visible when Gehlot visited the areas affected by locust terror on Monday.

Gehlot conducted inspection of the areas starting with Dhanau, Barmer which are affected by this trouble on Monday morning  and he saw the ground situation himself.

Bearing the cold weather, Gehlot had arrived in Barmer on Sunday night itself  and conducted inspection of Monday which indicated his seriousness towards this plight of the farmers. 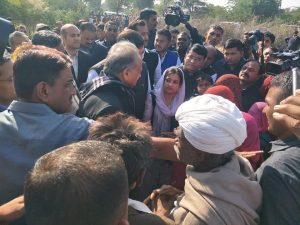 Gehlot has  been keeping a constant watch and has been relentlessly taking steps to control this problem which is affecting the farmers of the state.

While Gehlot fights this battle, much help and support is needed from the central government as this issue pertains to the union government. Recently, He had written a letter to the Prime Minister seeking assistance  in effective control of locusts in several districts of the state. Gehlot had requested the Prime Minister that the Union Government should coordinate with neighbouring countries, including Pakistan, for control of locusts.

Earlier, he had also asked the central government to provide additional resources and support for locust control as they continue to be active in the western districts bordering the state while the state government has already given relief to farmers by giving hundred percent grant on insecticides needed to control the terror of locusts.

Notably such kind of  serious terror of locusts was being witnessed after 26 years and the crops and other vegetation were in great danger due to these.

Gehlot to his credit has the experience of solving various troubles of farmers and agriculture and his sensitivity and attention will also solve this problem soon.