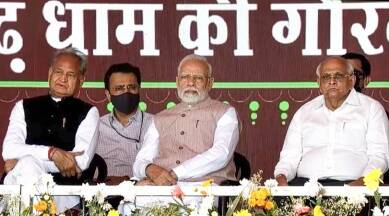 No one could have told this to the PrimeMinister in a very normal manner. But Ashok Gehlot is one such politician who minced no  words in telling Modi that the respects he gets while travelling abroad is because he is the Prime Minister of country of Gandhi. Speaking at Mangarh Dham, He said  “When Modi goes abroad, he gets so much respect. He gets the respect because he is the prime minister of the country of Gandhi, where the roots of democracy run deep and where, even after more than 70 years of independence, democracy is alive”. While some politically naïve people mistook it as a praise , Congress and other political pundits immediately knew that actually Gehlot had shown the reality mirror to the PM whose supporters claim that no other PM has been able to command so much respect abroad.

Also, CM Gehlot had urged PM Modi to declare Mangarh a national monument as well as for a review of the railway project between Ratlam-Dungarpur and Banswara, which was started by the previous Congress-led United Progressive Alliance (UPA) government at the Centre. Though  the PM did not make any  announcement of declaring Mangarh as a national monument.

CM Gehlot always speaks about the interests of the state,apprised the prime minister that his government has done a lot for tribals, from opening colleges and universities to providing healthcare facilities. “I will also urge the prime minister to examine the Chiranjeevi health scheme and I believe that you (Modi) would like to implement it across the country,”