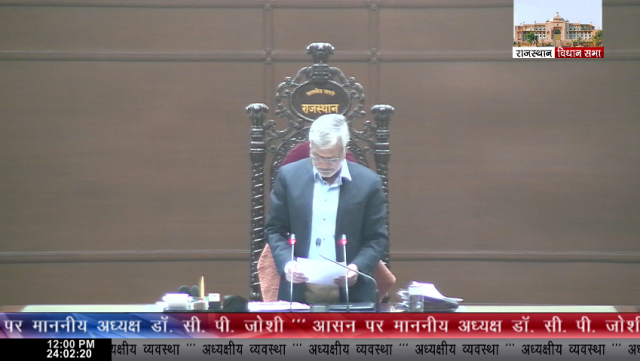 The debate on the budget which was presented by Chief Minister Ashok Gehlot started in the assembly on Monday.

Members of both the treasury benches and opposition took part in the discussion, which is expected to go on till late evening.

Independent MLA from Sirohi, Sanyam Lodha spoke in support of the budget that it was people friendly. He said that the budget allocations for various departments like agriculture, irrigation, transportation had seen rise and also Government revenue was expected to rise due to the prudent measures adopted in the budget. He was interrupted by deputy leader of opposition Rajendra Rathore who said that Lodha was speaking about the estimated figures.

Congress MLA from Bansur, Alwar Shakuntala Rawat also praised the budget terming it to be a budget for the welfare of the people and also tried to corner previous BJP government over ‘Jal Swavlamban Abhiyan’ and said that nothing was done under this project in her constituency. She thanked the chief minister Gehlot for giving ample budget for water conservation in the present budget.

Speaking from the side of opposition, BJP, MLA from Chomu Ramlal Sharma criticised the budget. He said while government claims to be taking steps for welfare of farmers, the budget has no mention of the undeclared electricity cuts which the people suffer .  Sharma demanded that government should give electricity supply for irrigation during day time too apart from night. He also pointed out that nothing was there in budget regarding METRO phase 2 project in Jaipur.

Udaipur rural MLA Phool Singh Meena too criticised the budget and said that nothing substantial was given for Mewar region.The debate continued in the Assembly by the time of filing of this report.