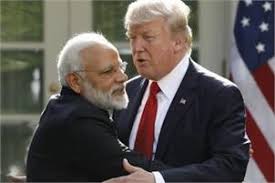 India and the US inked three (MoUs) on  the  second day of the visit of US President Donald Trump in India .

The memorandum of understandings were signed in the health and oil sectors. An MoU was signed on mental health between the health departments of the countries.

While another MOU was on the safety of medical products.

In the defence sector, helicopter deals worth $3 billion were also finalized. Trump announced that the two countries have finalised defence deals and declared that their focus was on having a comprehensive trade deal.

He asserted that there had been  very productive talk and  said that US has decided to expand  defence cooperation, and cooperation in dealing with cross-border terrorism, and in cyber-security.

While speaking with media in Hyderabad House in New Delhi on Tuesday. he also mentioned that Indo-Pacific region should be free and open for navigation and 5G technology should be used for spread of freedom and not for suppression of people.

“We affirmed that our two countries together will work to protect our citizens from radical Islamic terrorism. The U.S. is working productively with Pakistan to confront terrorists who operate on its soil,” said President Trump delivering a press statement.