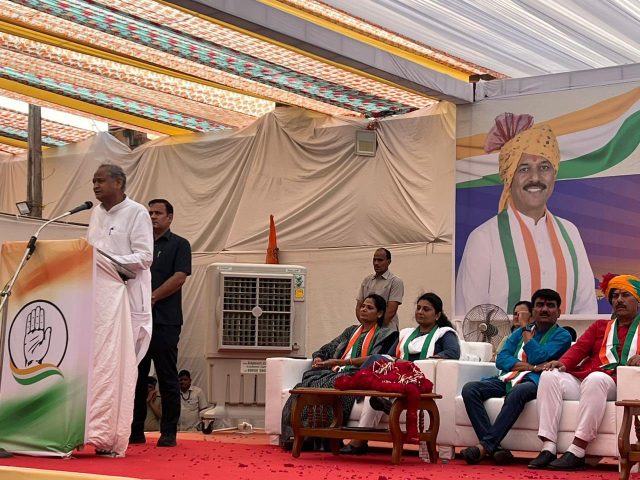 Ashok Gehlot is an epitome of hard work and perhaps he thrives on it. Yesterday he was out in the field in Gujarat addressing people, meeting the media and today he is in Himachal Pradesh . Both the states are due for elections in a couple of weeks and are important for congress to stay relevant in North Indian politics. There is no doubt that Rahul Gandhi’s Bharat Jodo yatra has received enormous success down south but in North, it is yet to enter and both Gujarat and Himachal are important for INC.  while Himachal has a tradition of changing the government alternatively, BJP is serving for last several years in Gujarat unabated. Last time in Gujarat Gehlot stopped the BJP to secure 100 seats at a time when Amit Shah had given the call of 150 seats. This time things are a bit different as AAP is also making its presence felt in the state.

Gehlot has been crisscrossing the state and is exposing BJP’s Gujarat model and at the same time informing people about the Rajasthan model and various welfare schemes of the state. Old pension scheme has come out as a major gain for the Congress courtesy Gehlot. He was the first to introduce it in Rajasthan and now it has become a major political issue in Himachal Pradesh as well as Gujarat. Today Gehlot is in Himachal, last day was in Gujarat and has been super active in managing poll related activities in these states while also delivering governance in Rajasthan. Youngsters should learn time management from him for sure.