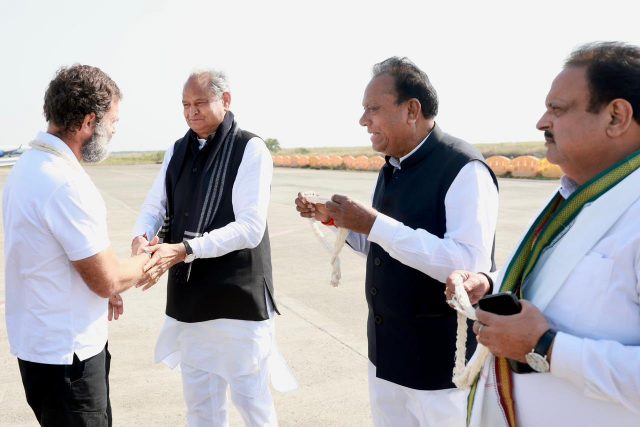 There was a time when Saurav Ganguly and Sachin Tendulkar used to be Team India’s favourite openers. Their partnership was talked about with a sense of dread by their opposing teams. Similar is the situation when Rahul Gandhi and Ashok Gehlot both team up together against the BJP. Both attack the BJP ideology and mince no words to bring out the reality of BJPs Gujarat Model. The 2017 Gujarat elections saw this and today both the leaders were together in Surat Gujarat. Gehlot has been making deep inroads in the BJP bastion in his role as a senior observer while the former President of Congress party Rahul Gandhi who is undertaking Bharat Jodo Yatra , made an appearance today in Gujarat taking out time from his popular yatra to join the canvassing in the state.

Two days back, Gehlot was sitting beside Sonia Gandhi who had demitted the office of Congress President just a few days ago and now in Gujarat both Rahul Gandhi and Gehlot are together in attacking the BJP. This combination is a severe nightmare for the BJP. Last time Gehlot had restricted BJP to 99 seats and this time he has given a kick start to the party’s campaign. The way Tendulkar and Ganguly ‘s partnership was an asset for the Indian cricket team, the pair of Rahul Gandhi and CM Ashok Gehlot is one of the prolific partnerships of the congress party.