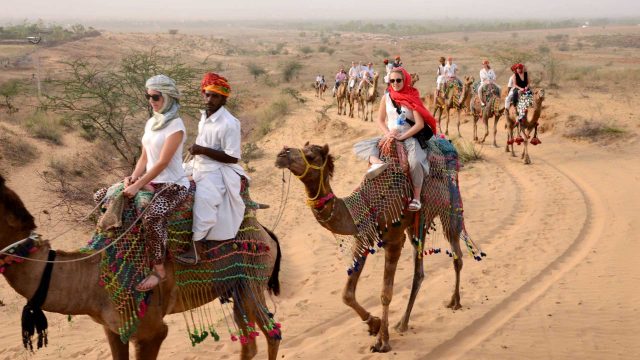 Rajasthan and tourism are kind of related to each other as many places of Rajasthan have an interesting history and rich heritage. People from different states and nations love to visit here. The Rajasthan government has done a lot of things related to tourism for the preservation of historic buildings, beautiful natural resources, amazing wildlife, diverse culture, jaw-dropping architecture, and much more. Rajasthan’s wildlife sanctuaries have a separate fan base for tourists from foreign countries. To attract them, the state government is making efforts to develop them and make them safe for every visitor.

The state government is continuously developing the tourism sector to make it an interesting and revenue-generating means. Recently, A new tourist route Bara-Liwari has been started in the buffer area of Sariska Tiger Reserve. The Tiger Reserve area at Sariska has emerged as a major tourist destination and is proving to be an important factor in the development of the district. Sariska, keeping its indelible identity in the country and abroad with its captivating natural shade, has been attracting tourists towards it, which along with tourism development also encourages the creation of employment at the local level.

The state government is making Rajasthan tourism full of entertainment and facilities like foreign countries. Efforts are also being made to operate cruise ships for tourists on the Chambal river and to operate houseboats on other big lakes and ponds of the state. Such cruise ships are being run in other major rivers and water areas including the Ganges River in the country. This has opened new possibilities for tourism development and employment in those areas. In Rajasthan also, serious efforts are being made to run cruise ships and houseboats on the same lines in the Chambal river and other major lakes, ponds, etc. This will not only develop new areas of tourism in the state but will also provide employment opportunities to the youth.

Rajasthan is full of tourist destinations. The air here smells of royalty. With the new era, foreigners and even celebrities are coming to Rajasthan for their wedding as they want to give a royal touch to their wedding. The Rajasthan government is making every possible effort to uplift the facilities and make it easy and convenient to travel to Rajasthan. People can even digitally wander & know about various places of the state through its Rajasthan tourism app. The efforts of the state government to make the tourism sector safe and convenient and to accelerate tourism by integrating innovations are commendable.