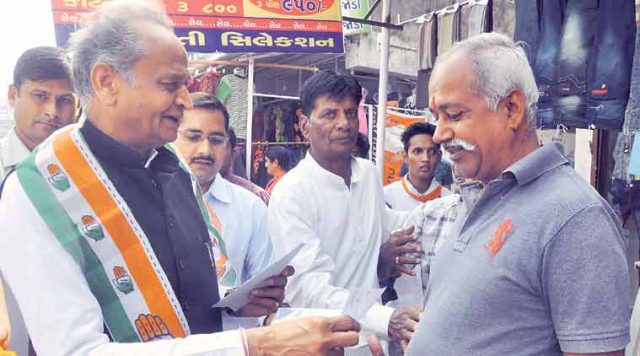 The memories of that famous battle in which Gehlot turned the tables on the BJP is brought back to relevance after CM Rupani resigned from his post due to the infighting in the BJP.

How and why the media couldn’t get a whiff of the brewing crisis in the state is another question altogether but political people are remembering the time when Gehlot left no stone unturned to post a great challenge to the BJP due to which Rupani’s current tenure became lacklustre.

Gehlot had made the saffron party look like a paper tiger in a state that it has held for almost two decades and it is because of Gehlot’s efforts that Congress looked so much in control that it has never been since the last many decades.

The articulate organization man Gehlot had strengthened the roots of the party in the state and had raised the morale of the workers. He even went  door to door to distribute voter slips which is a big thing coming from a then two time CM . Gehlot’s sincerity and hard work impressed people who gave Congress a chance and this had weakened the BJP on many fronts.

The party couldn’t repeat the same mandate and under Gehlot Congress became a powerful force in the state back to relevance.

Today when Rupani resigned, it can be said that the seeds of the fall of  the current government were sowed soon after Gehlot made Congress relevant in the state.