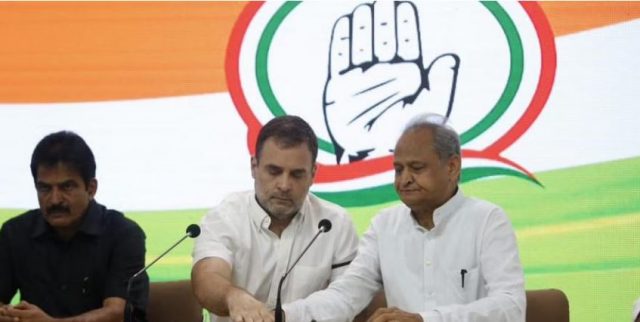 Despite continued attack on the Congress party by the BJP, the tenacity and untiring efforts of Rajasthan CM Ashok Gehlot to uphold and strengthen the ideology of Congress is being seen as an inspiration to other leaders. An astute & experienced man shared the centre stage with Rahul Gandhi and took on the BJP. He quoted a global leader about the way everybody chose to stay mum during the Hitler era in Germany to prove his  point. Later Gehlot along with Priyanka Gandhi staged demonstration with a cooking gas cylinder by pulling its cart to highlight the issue of incessant price rise in the country. The point is that the three time CM of the country’s largest state is actively working on the ground, hitting the road against the policies of the BJP government at centre, almost looking like a school of learning politics for the young leaders.  The national media is interested to interact with him because he explains the nitty gritty of complex issues in a simpler manner making it easy for everybody to understand. Given his long experience in governance, he has a deep understanding of the taxation issues and can therefore speak with dominance over the way changes in the excise duty on petrol is affecting the state governments. It is rather unfortunate that country doesn’t has more leaders like him who have command over economic issues which have a bane for the common people.