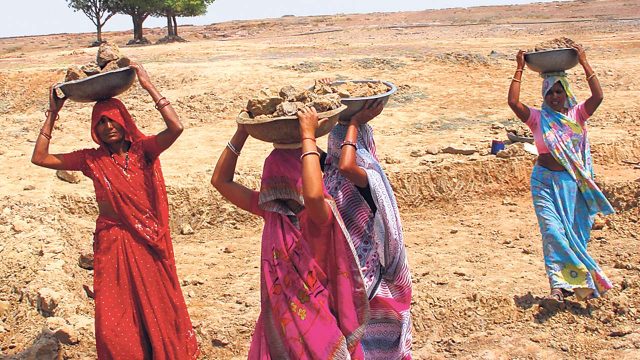 Rajasthan is a model state when it comes to effective implementation of MGNREGA and RTE and giving health benefits  -issues on which Congress party has always stressed.

The state is in the top league in terms of giving employment under MGNREGA scheme which was devised by UPA. Infact Rajasthan has topped the country and as of now 42 lakh people across the state are engaged in various works under MGNREGA.

Chief Minister Ashok Gehlot has included this scheme in his efforts to provide employment to migrant labourers and they too can apply for work under this rural empowerment scheme which has actually come as a relief during Corona period.

During a recent interaction with panchayat level leaders and Sarpancahs, Gehlot insisted that the Centre should double the number of days of employment under the rural job guarantee scheme, saying the UPA-era law MGNREGA has proved its worth in providing livelihood to the poor.

It is worth remembering that during the first tenure of Modi government, MGNREGA was criticized by the government and was called as a living monument of UPA failure however in this crisis time, MGNREGA is providing employment to lakhs and lakhs of people across the country of which Rajasthan is at the top.

Right to Education was another historic law which was enacted during the UPA era. Gehlot during his previous stint had implemented this law in totality , however during the BJP rule in the state, the income criteria for availing the benefit of the scheme was reduced. Gehlot has now strengthened the scheme and has increased the income limit of Rs 1 lakh to Rs 2.5 lakh annual income. Now more students from weaker sections will be able to get free admission in private schools.

Similarly, during the current corona crisis, While congress party has stressed on conducting more and more testing, Rajasthan is actually ahead than most of the states in conducting corona testing and over 16000 tests per day are being in the state, while its health infrastructure is one of the top across the country.