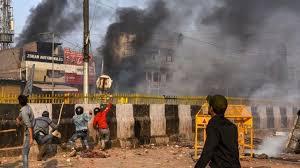 Amidst the incidents of violence in Delhi, a high level meeting was convened by union Home Minister Amit Shah on Tuesday morning.

After the meeting, Kejriwal while speaking to media said that everyone wants that the violence be stopped. He said that the Home Minister had called a meeting, it was a positive one. It was decided that all the political parties will ensure that peace returns to our city.

A day earlier , on Monday,there were reports of death of people including a Delhi Police Head Constable Ratan Lal who was native of in clashes between those against and in favour of the controversial Citizenship Amendment Act (CAA) and proposed National Register of Citizens (NRC).

It was the second consecutive day when the violence broke out in Maujpur and other adjacent areas in northeast Delhi.

Various media reports have informed that fresh incidents of stone-pelting were reported from Maujpur and Brahmpuri localities of Delhi on Tuesday morning.  Police and Rapid Action Force (RAF) held a flag march in the troubled spots to restore normalcy. Leaders across political parties have called for shunning violence and for maintaining law and order.